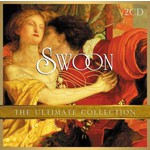 Swoon is one of the most remarkable musical phenomena of our time. Featuring favourites from the original collections alongside tracks never heard before on a Swoon album.

20 years ago, ABC Classic FM's Breakfast presenter Christopher Lawrence and producer Philip Carrick had an idea: amidst the up-beat music that listeners needed to kick-start their day, they introduced a segment dedicated to calm and reflection, a moment to draw breath before the day started. They chose music that would make the world stand still - and Swoon was born.

The initial Swoon CDs were the highest-selling classical compilations in the history of Australian music, but have been long out of print. And now, to celebrate twenty years of Swoon - which still appears on the ABC Classic FM Breakfast show - ABC Classics is proud to release a new 2CD set - Swoon: The Ultimate Collection. Featuring favourites from the original collections, including Mozart's Gran Partita, Rodrigo's Concierto de Aranjuez and Sculthorpe's Left Bank Waltz, we also present iconic new Swoon tracks by - among many others - Nigel Westlake, Hildegard of Bingen, Mahler and Bach.

Showcasing some of the most stunning music ever written, this collection is a must-have for Swoon devotees new and old.