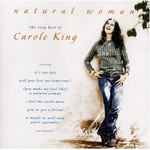 A great compilation from one of the greatest singer / songwriters. Starting her career as a staff songwriter at the Brill Building, one of the most successful hitmaking factories, and writing dozens of hit songs for other performers, Carole King started recording her own compositions.

It was her second album 'Tapestry', that catapulted King onto worldwide charts. An immediate smash hit it would go on to sell more than 75 million copies and cement King as a force both as a writer and performer.

It's Too Late
Sweet Seasons
Jazzman
I Feel The Earth Move
Oh No Not My Baby
Up On The Roof (Live)
Will You Love Me Tomorrow?
You've Got A Friend
Natural Woman, (You Make Me Feel Like) A
Brother, Brother
Corazon
Hard Rock Cafe
So Far Away
It's Going To Take Some Time
Nightingale
Some Kind Of Wonderful
Music
Been To Canaan
Only Love Is Real
Carry Your Load
Crying In The Rain
It Might As Well Rain Until September

Boots No. 1: The Official Revival Bootleg