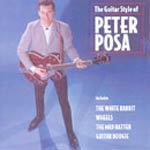 Peter Posa began playing the guitar at age seven, and by the time he was eighteen had recorded his first single, Wheels. Over the next ten years Peter recorded a staggering nineteen albums, fifteen EP's, and twenty-eight singles, surely the largest body of recorded work by a New Zealand artist.

His biggest single success was the 1964 chart topper, The White Rabbit, recorded incidentally in one take, and the biggest instrumental hit ever in this country. This selection of tracks chosen from his many album releases will bring back a lot of happy memories and certainly shows why he is one of our most loved instrumentalists.

The Very Best of Kiwi Country