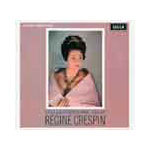 The present recital, made in May 1963 (just four months before the Berlioz and Ravel) gives a wonderful glimpse into several of the Italian roles Crespin performed.

To celebrate Decca's 75th year of recording — the launch of a new series of Classic Recitals from the LP era.

Decca's recorded legacy is dominated by the huge number of complete opera recordings and vocal recitals. While a vast number of these recordings have seen CD release in the past 20 years, many of the original LP recitals have been reissued with other material in order to increase the overall playing time due to the longer time available on CD, and modern covers have replaced the originals.

This new mini-series is unashamedly nostalgic and presents original recitals as they were first published during the 1950s, 1960s and early 1970s. Original LP cover art is reproduced and the original back of the LP is used as the inside of the digipack. A clear tray is used with a detail from the original LP sleeve as a background, and the back of the digipack gives the tracklist and artist details in a uniform, current style.

French soprano Régine Crespin was born in Marseilles on 23 February 1927. She made her operatic debut in Mulhouse as Elsa, and it was with this role that she also made her first Paris Opéra appearances that same year. She gained experience in a large number of predominantly French roles in the following years (many of these appearances were in smaller houses in the provinces) and she returned to Paris in 1956 as Weber's Rezia. Bayreuth beckoned and there she sang Kundry (1858-60) and Sieglinde (1961). (She would later record the role of Sieglinde in Solti's legendary recording of Der Ring des Nibelungen.) Glyndebourne saw her as Strauss' Marschallin, a role for which she won much praise and in which she would make her debuts at both Covent Garden and the Met (in 1960 and 1962). 1967 would see her first Walküre Brünnhilde at the Salzburg Easter Festival. During the late 1960s she experienced a number of vocal problems and she moved into the mezzo-soprano repertory where she had great success in a number of major roles including Carmen. Crespin retired from the stage in 1989.

One of the most stylish singers of her era, Crespin's attention to detail of words and phrasing made her particularly suited to French repertory; her second solo recording for Decca was her now legendary account of Berlioz's Les Nuits d'été and Ravel's Shéhérazade with Ernest Ansermet. The present recital, made in May 1963 (just four months before the Berlioz and Ravel) gives a wonderful glimpse into several of the Italian roles Crespin performed.

All the tracks on this recording with the exception of the excerpts from Otello & Madama Butterfly are receiving their first international release on CD.