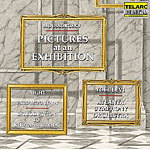 In this blockbuster all-Moussorgsky release, Levi and Atlanta prove "…a performance where throughout the conductor makes the most of the colour, and brilliant orchestral effects of Ravel's inspired score, revealing much that often gets unheard…the Telarc disc remains a first choice." - Gramophone

"…a performance where throughout the conductor makes the most of the colour, and brilliant orchestral effects of Ravel's inspired score, revealing much that often gets unheard…the Telarc disc remains a first choice." - Gramophone


"There are many things to savor in this wonderful account...superlative playing...Telarc's stunning recording...but first and foremost it is Yoel Levi's complex symphonic structures which places the disc amongst the very best in the catalogue." - British CD Review

In this blockbuster all-Moussorgsky release, Levi and Atlanta prove their virtuostic mettle. Highlighted by a stunning performance of the orchestral showpiece, Pictures At An Exhibition, this release is a must for every listener's collection. The beautiful introduction to the opera Khovanshchina, subtitled "Dawn on the Moscow River," with its shimmering tonal colors, makes a marvelous addition to the other two works. Moussorgsky's Pictures At An Exhibition was inspired by the death and subsequent memorial showing of the works of Victor Hartmann, a Russian artist and architect who had been a close friend of the composer. He composed it quickly, in part because he wrote the piece as a series of sketches for piano solo and had no troublesome orchestrations to deal with. In 1886, after the composer's death, Rimsky-Korsakov made a revision of the original piano score upon which most of the later orchestral versions of the piece were based. For this recording, the 1923 orchestral transcription by Maurice Ravel has been used. Night On Bald Mountain, Moussorgsky's only extended orchestral work, was never performed in his lifetime. The original version of the work, from 1867, was not published until 1968 and was first recorded in 1981. The version we commonly hear of the piece today is a re-working of the score by Rimsky-Korsakov who conducted its premiere in 1886 in St. Petersburg.

The opera Khovanshchina was written during the last decade of Moussorgsky's life, and was left unfinished at his death in 1881. It fell to Rimsky-Korsakov, once again, to revise and orchestrate the work from a draft manuscript for voice and piano. The work was first staged professionally in 1911.

2. Pictures at an Exhibition

3. Introduction to Khovanshchina (Dawn on the Moscow River)