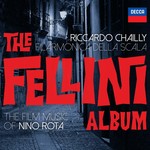 Together with the Filarmonica della Scala, Riccardo Chailly explores the iconic film scores of Nino Rota in a new collection, The Fellini Album, on Decca. Released to mark 40 years since Rota's death in April 1979, the album contains music from classic Federico Fellini films that capture the spirit of Italian cinema in the 1950s and 60s, including La Dolce Vita, Amarcord, 8 ½, The Clowns and Il Casanova.

• A remarkable collaboration encompassing the giants of Italian film, composition and classical music.

• Classy, characterful and nostalgic, this album is the soundtrack to the perfect summer.

Swoon - The Ultimate Collection: music of rapture to make the earth stand still