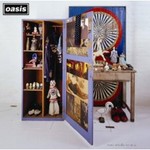 Oasis has been at the helm of the world's music scene for over ten years. Unlike most albums of this nature, Oasis has picked the songs themselves and they consider them to be their finest moments. The result is a journey through 12 unforgettable years in their first ever 'best of' collection - 'Stop The Clocks'. This retrospective draws together years of multi-platinum albums, number one singles and instantly familiar B-sides.

Oasis have been at the helm of the world's music scene for over ten years and, on this first ever Oasis retrospective draws together the years of multi-platinum albums, Number One singles and, unique to Oasis, instantly familiar B sides into one 18 track double album. Furthermore, 'Stop the Clocks' has been chosen by the band themselves - the songs they believe encapsulate their remarkable career to date.

Oasis are widely regarded as the defining rock n roll band of the last decade, bestriding the music world since the release of debut single, "Supersonic" in 1994 to the current day whilst claiming a host of records for their own. Second album, 'What's The Story, (Morning Glory)', from which several of the tracks here are drawn, remains the highest ever certified album at 14 x platinum whilst their combined album sales total close to, a remarkable 40 million sales worldwide.

Unlike most albums of this nature, Oasis have sat down and undertaken the almost impossible job of picking what they consider to be their finest moments ever. So 'Stop the Clocks' is imbued with the sort of wilfulness that has helped make Oasis the favourite band of millions of people worldwide and its running order will no doubt provoke equal parts adulation and bar discussions from the millions of Oasis fans worldwide. Could it ever be any other way?

'Stop the Clocks' includes the definitive 'greatest B side ever', "Acquiesce", evoking memories of the 'White Room' performance that so many regard as Oasis' greatest music television moment. Also present is "Half The World Away", another B side that became instantly recognisable to all in the UK for its use as the theme music of TV's "The Royle Family".

Then come the singles, a stream of contemporary classics starting with "Supersonic" and moving on to anthems such as "Wonderwall", as well as more recent moments such as "The Importance of Being Idle". These songs explain in an instant why Oasis remain cover stars worldwide as well as being continuously name checked by contemporary bands as their greatest influence.