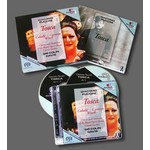 The blissfully melodic drama full of delicate weaknesses, La bohème, was followed by the chamber of horrors which was Tosca. Giacomo Puccini demonstrated the artistic acrobatics of which he was capable in two of his most successful works.

The blissfully melodic drama full of delicate weaknesses, La bohème, was followed by the chamber of horrors which was Tosca. Giacomo Puccini demonstrated the artistic acrobatics of which he was capable in two of his most successful works. Both through-composed musical dramas are written on a major dramatic scale, and contain the best the master of the musical-psychological portrayal ever produced - yet they are extreme consequences of the development of his personal style: fire and water.
Puccini first had the idea of putting the story of Tosca to music in 1889, when he saw the play Tosca, written by the French writer Victorien Sardou, at the Theatre Filodrammatico in Milan, starring Sarah Bernhardt in the title role. The "crime thriller" about the singer Floria Tosca must have exerted an enormous influence on Puccini, as the crude mixture of crime, torture and love in the story, which took place against the patriotic background of revolution, filled the composer with enthusiasm, despite the fact that he was not able to understand French.

The collaboration with his "personal librettists", Luigi Illica and Giuseppe Giacosa, turned out to be highly challenging for both parties, as Puccini remained greatly involved in the work on the libretto and intervened continuously. Sardou, whom Puccini had met during the première of La bohème in Paris, also had his own ideas: these, however, finally had to make way for Puccini's sure feeling for the music-dramatic and theatrical setting of the play. Thus, for instance, the four-act original was reduced to three acts. What at first sight seemed to pare the work down to dramaturgic breaks, proved at further investigation to be a planned procedure, which now created room for the drama of the situation and the emotional side-play. Unity is created solely by the music. Puccini's musical translation is not principally aimed at the portrayal of factual historical situations, but at interpersonal relationships, detached from time and space. Man and his social interactions are fully at the centre of the aesthetics of this opera by Puccini.

The drama of Tosca takes place against a historical background; however, one which provides no more than a foil for the drama taking place between the trio of Floria Tosca, her lover Mario Cavaradossi and the Roman chief of police Scarpia. Puccini's score mediates between extremes and portrays the blatant events in naked naturalism. Here Puccini declares himself to be a Verist. The contrasts between the ceremonial Te Deum, Tosca's cantata in the style of Paisiello, the portrayal of Rome awakening to pastoral sounds, the aria-like monologues of Cavaradossi, and the cheerful scenes of the sexton, as well as the great duets between Tosca and Cavaradossi, are portrayed vividly.

The plot. Rome, June 1800. The chief of police Scarpia arrests the painter Mario Cavaradossi and his lover, the singer Floria Tosca, whom he himself greatly desires, in order to catch Angelotti, the escaped political prisoner, whom Cavaradossi is harbouring. In order to save the life of her beloved, Tosca agrees to Scarpia's demand: to be his for one night. Yet before he can even touch her, Tosca kills him: in vain, however, as the reward Scarpia had promised for the night of love - i.e. the faked execution of Cavaradossi - turns out to be nothing but hot air, as Mario collapses under a hail of real bullets. Pursued by Scarpia's men, Tosca manages to escape by leaping from the turrets of the Castel Sant'Angelo.