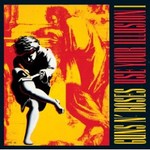 Guns N' Roses
Use Your Illusion I (180g Double LP)

There was a time when the four years it took GNR to follow up their 1987 debut, Appetite For Destruction, was considered a little excessive. As if to make amends, the band released not one, but two new double albums simultaneously in September 1991. Among its 16 tracks, the album's centrepiece is the 11 minute epic single 'November Rain', as well as 'Don't Cry', 'The Garden' (featuring a guest appearance from Alice Cooper) and a cover of Wings' James Bond classic 'Live And Let Die'.

The album debuted in the USA at No 2 and is now certified seven times platinum, kept off the top spot by companion album, Use Your Illusion II. According to Rolling Stone's review "Guns N' Roses fire on all comers and take no prisoners". On Use Your Illusion I, Axl was joined by Dizzy Reed on keyboards, and former Cult drummer, Matt Sorum, replacing founder member Steven Adler, as well as original members, Slash, Duff McKagan and Izzy Stradlin, who was to leave shortly after the album's release.

Released on Double 180g vinyl with a download code.