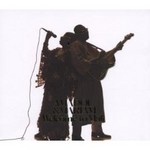 This CD expands Amadou and Mariam horizons, and yet remains true to their core sound - a unique mix of sweet melodies and funky rhythms, driven by Amadou's bluesy guitar and the duo's compelling voices.

Amadou and Mariam, African superstars and married couple from Bamako, have, since the release of their Manu Chao-produced 'Dimanche à Bamako' album in 2006, become the world music act that it's ok to like. They've achieved this through their uplifting live shows and by being musically unique - blending their Malian blues with Western pop savvy. 'Welcome To Mali' only increases their standing. It's a gem!

Having been part of the recent Africa Express shows it's no surprise that this album features Damon Albarn (Blur) as guest producer on the opening track, 'Sabali'. Luckily he's tweaked the sound in exactly the right direction, focussing on the sweet pop tones of Mariam, underscoring it with charming synthesizer arpeggios. Elsewhere the production still leaves space for some arresting contemporary tricks. It brings home the reason that Europe has taken them to its heart - their style, not unlike Bob Marley's, is resilient enough to withstand any amount of Western tinkering.

There are a number of other special guest appearances on the album - Keziah Jones, 'M', Tiken Jah Fakoli, Toumani Diabate and Juan Rozoff - but Amadou & Mariam are just too good to let anyone showboat all over their album. It's a mix of the deceptively simple and rhythmically irresistible.

'Welcome to Mali' expands their horizons and yet remains true to their core sound, putting the spotlight firmly back on their unique mix of sweet melodies and funky rhythms, driven by Amadou's bluesy guitar and the duo's compelling voices - a timeless Africa-goes-global vibe.