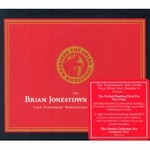 For almost 15yrs, Anton Newcombe and his ever-rotating crew of accomplices in Brian Jonestown Massacre have been conducting a prolonged experiment concerning the theory there's no such thing as bad publicity. Over the better part of their career, the band has been more closely associated with outrageous ego trips, prolific drug use, violent feuding and bountiful sideburns than their actual musical output ~ witness the Sundance Grand Jury-winning doco 'Dig!' [also featuring Dandy Warhols] for proof.

'Tepid Peppermint Wonderland: A Retrospective' is the perfect starting point then, as well as an indispensable summary for older fans: 36 songs including 5 previously unreleased and 3 previously unreleased live tracks, lovingly compiled with a 24-page booklet, extensive liner notes, unpublished photos and a track-by-track commentary from previous and current band members.

Formed in 1990 in the Haight-Ashbury district of San Francisco, the Brian Jonestown Massacre is very much an amalgamation of that city's past and present musical forces, while also tipping their hats to Velvet Underground and The Jesus and Mary Chain.

The double disc 'Tepid Peppermint Wonderland' is the soundtrack for losing your mind and finding it again - a vital piece of work.