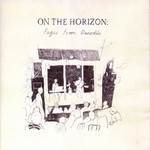 Various Artists
On the Horizon - Pages From Dunedin

'On the Horizon - Pages From Dunedin' is a compilation album showcasing Dunedin's new generation of songwriters. The music centres around emotive, effecting songs, layered in stories of life, death, love, isolation, stereotypes, home and transience.

'On the Horizon - Pages From Dunedin' is a compilation album showcasing Dunedin's new generation of songwriters. It is the second release from Horizon Music NZ, following a 2006 compilation of Auckland artists, called a "homegrown gem" by NZ Musician Magazine.

The album features live performances by 17 songwriters, taken from 11 recorded concerts, involving over 40 acts. It captures the vibrant community which has surrounded Horizon Music events since 2006, highlighting the depth of independent songwriters in Dunedin and around New Zealand.

'On the Horizon - Pages From Dunedin' unifies an eclectic group of musicians through sparse arrangements featuring acoustic guitar, piano, strings and harmonica. It holds its edge and dynamic with a full band mid album, and the smooth transition between tempos and genres.

The music centres around emotive, effecting songs, layered in stories of life, death, love, isolation, stereotypes, home and transience. It is this lyrical depth which grounds these catchy, melodic songs in the traditions of folk, and sets them alongside the indie songwriters of the present day.

Tex Houston (The Clean, The Verlaines) has recorded, mixed & mastered the album and it has been compiled and produced by Alastair Burns.

Pages from Dunedin was launched in May 2009 with an enormously successful concert at Dunedin's Regent Theatre. It featured 13 acts from the album, and drew over 500 people. This was followed by a 16 show tour, playing to full houses throughout New Zealand.