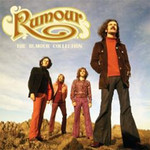 Rumour originally came from Huntly and began life as The Surfies in 1966 before moving to Auckland, recording three singles for the Zodiac label and changing their line up and name to Rumour.

The band were discovered and managed by Ray Colombus and in Auckland, Shade and Gerard began writing great songs including "L'Amour Est L'Enfant De La Liberte (Love Is The Child Of Freedom)" which was a No.1 for 6 weeks. They were the support act for The Beach Boys and Neil Sedaka for their Auckland shows, and also toured New Zealand with Cilla Black.

Rumour released four albums, 'Garden Of Your Smile' (1971), the very popular 'Land Of New Vigour And Zeal' (1972) - about the first immigrants to come to this country, 'Holy Morning' (1972) - containing songs from the first two albums, plus a few new ones and a greatest hits compilation in 1973 called 'An Evening At Home - The Best Of The Rumour'.

After going their own separate ways for a few years, they reunited in 1985 for the 25 years of television special, which was nationally broadcast on TV1 from the Michael Fowler Centre in Wellington.

As well as the four original "Sapphires" from Huntly College, the band now includes Barry Rushton (drummer) from the 60s band The Kal-q-Lated Risk (from Palmerston North) and Judy Donaldson, formerly of the popular TV and recording duo The Chicks and wife of bassist Ross Hindman.

MARBECKS RARE: The Very Best of The La De Das