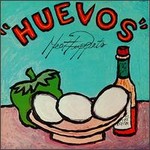 Recorded and released just a few months after the experimental Mirage, 1987's Huevos was a return to the Meat Puppets' earlier, more straight-ahead direction. The band (guitarist/singer Curt Kirkwood in particular) had always voiced their admiration of ZZ Top, and Huevos contained Billy Gibbons & Co.'s influence more than any other Puppets release. But don't be misled - it wasn't a ripoff, the trio simply incorporated ZZ's sound into their energetic, unpredictable rock. It also didn't hurt that Huevos contained the band's best set of songs since 1985's classic Up on the Sun, comprised almost entirely of heavy rockers ("Paradise," "Look at the Rain," "Crazy," "Fruit," "Automatic Mojo," "Dry Rain," etc.). Another major improvement of Huevos over Mirage was that Derrick Bostrom's drums no longer sounded metronome-perfect and robotic, giving the performances a much livelier edge. The bonus tracks included on the '99 Ryko reissue included several demos of Huevos tunes, including a lengthier and much more laid-back version of "Sexy Music," as well as a medley of "I Can't Be Counted On" and Jimmy Reed's "Baby What You Want Me to Do." ~ Greg Prato, All Music Guide