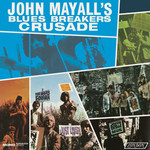 Crusade (1967) finds John Mayall welcoming another soon-to-be-famous young guiarist - 18-year-old fretboard phenom Mick Taylor, who would soon become a key member of the Rolling Stones - to the Bluesbreakers fold. With John McVie on bass and Hughie Flint and Keef Hartley sharing drumming duties, Mayall tackles an adventurous 12-song set that encompasses several Mayall originals and Taylor's instrumental showcase "Snowy Wood," as well as numbers by such notables as Willie Dixon, Eddie Kirkland and Sonny Boy Williamson. Regarded by many fans as the final third of the influential electric-blues trilogy that began with Blues Breakers and A Hard Road, Crusade followed its predecessors into the British Top Ten, while continuing to open young American ears to the timeless power of the blues.

From the pristine U.K. mono masters, with complete original artwork and photos.