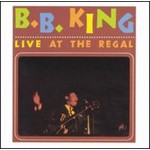 When he stepped onstage at the storied Regal Theatre on Chicago's Southside in November 1964, B.B. King had 30 R&B hits but had barely creased the pop charts. Recorded that night, King's first live album would become an entry point for many white listeners, and blues aficionados still speak of it with awe - Eric Clapton was rumoured to spin Live at the Regal to prep for his shows.

Newcomers encountered an urbane but never slick professional, backed by a killer horn section, who belted each number with class and grit, all the better to showcase the jazzy yet terse yet economical solos he coaxed from his beloved black Gibson, "Lucille."

His set here begins, as it did those days, with "Everyday I Have the Blues" - not a lament, but the boast of a touring workhorse who performed more than 300 shows each year.

Side A:
Every Day I Have The Blues
Sweet Little Angel
It's My Own Fault
How Blue Can You Get
Please Love Me

Side B:
You Upset Me Baby
Worry, Worry
Woke Up This Mornin'
You Done Lost Your Good Thing Now
Help The Poor