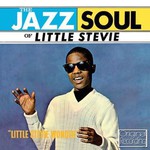 The debut album recorded by Motown's latest recruit in 1962, The Jazz Soul Of Little Stevie showcases many of skills Stevie was later to rely on, with one major exception - his vocal. Arriving at Hitsville as a prodigious percussionist (more than capable on drums and bongos), harmonica, keyboardist (piano and organ) and as a singer, his voice had a natural childlike quality, one which would be fully exploited on the later release of Fingertips, the live single and subsequent album that topped the chart in 1963. For his humble beginning, however, Motown teamed him with producers and writers Henry Cosby and Clarence Paul, both of whom would feature prominently in Stevie's career for the rest of the decade. The resulting album is more jazz than soul but compelling none the less, giving Stevie Wonder the opportunity to express himself musically if not vocally. He even gets to aid in the composition of two of the album's nine tracks, thus adding another string to his bow.