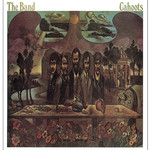 Originally released in 1971, Cahoots is the fourth overall album from the Canadian/American roots revitalists and a distinct carnivalesque spirit and beauty infuses the entire set. Highlights include the tracks "Life Is a Carnival," Bob Dylan's "When I Paint My Masterpiece" and "4% Pantomime" which features and was co-written by Van Morrison.

All 'From The Capitol Vaults' titles feature carefully replicated artwork and packaging true to their original single or gatefold jacket LP releases.