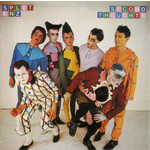 Second Thoughts was the 1976 album by Split Enz, recorded in London with Roxy Music's guitarist Phil Manzanera producing the album. Five of the songs on the album comprised of reworked versions of songs from their 1975 debut album Mental Notes. Two other songs on the album had been first recorded during the Mental Notes sessions but were left out and were re-recorded for Second Thoughts.