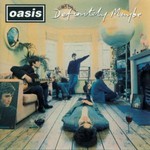 2014 marks the 20th anniversary of the release of Oasis' debut 'Definitely Maybe', an album that appears regularly on 'best album of all time' polls. It was originally released in August 1994 and fast became an album that helped define a generation.

Definitely Maybe is part of the reissue series (in chronological order) of Oasis albums by Big Brother Recordings as part of their Chasing the Sun series. Each album has been remastered and includes rare and exclusive bonus content.