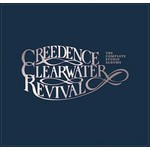 Creedence Clearwater Revival are unquestionably one of the greatest American rock bands ever, for many they are the quintessential rock band with a roots edge to them. They will best be remembered for their unique bayou sound popularized in songs like 'Proud Mary' and 'Green River' making albums that still bear repeated listenings, reminding us that great albums are all about great songs.

Although their music evoked the raw, gospel-tinged sound of the rural South, Doug Clifford, Stu Cook, and Tom and John Fogerty actually hailed from El Cerrito, California where back in 1960, while in junior high school, the boys formed a band called Tommy Fogerty & the Blue Velvets.

A cover of Dale Hawkins's 'Suzie Q' was their first single in 1968; a cover of Screamin' Jay Hawkins's 'I Put a Spell On You' followed it, both featuring on their first album, "Creedence Clearwater Revival".

With the release of their second album, "Bayou Country" in January 1969 , it became evident that Creedence had an uncanny knack for writing hits. Later the same year they released a further two albums , "Green River" and "Willy and The Poor Boys".

By 1970, CCR had undeniably become the number one American rock and roll attraction releasing two album that year "Cosmo's Factory" and "Pendulum". In 1971 Tom Fogerty left the band to pursue a solo career, the remaining members went on to record Mardi Gras theior final studio album released in 1972.