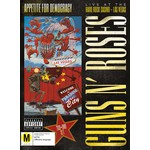 In November 2012, with a team of cameras rolling, the legendary, multi-platinum selling rock band Guns N' Roses took the desert by storm, performing a blistering set at The Joint in the Hard Rock Casino in Las Vegas. Clocking in at just under three hours, the band's explosive set includes all of their biggest hits and classic GN'R staples.

The live Guns N' Roses concert film Appetite For Democracy 3D: Live at the Hard Rock Casino - Las Vegas is now available in a Deluxe 2CD+DVD set featuring the 2D version of the film & 2 CD's of live audio . It is mixed in 5.1 Surround Sound and feature bonus interviews with the band.

Appetite For Democracy is the first official Guns N' Roses live concert film since 1992's Use Your Illusion concert video and features brand new live performances of classic GN'R tracks including "Welcome To The Jungle," "Sweet Child O' Mine," "Mr. Brownstone," "Paradise City," "Nightrain," "It's So Easy" and "Rocket Queen," from their pivotal, 1987 No. 1 debut album Appetite For Destruction; "Patience" and "Used To Love Her" from 1988's No. 2 charting album Lies; "November Rain," "Don't Cry," "Civil War" and "Estranged" from their 1991 releases Use Your Illusion I and Use Your Illusion II, the latter shooting to No. 1 on The Billboard 200; and current favorites off their 2008 No. 3 album Chinese Democracy including "Better," "Catcher In The Rye," "This I Love," "Street of Dreams" and the album's title track. Appetite For Democracy 3D also features the band's signature versions of Paul McCartney's "Live and Let Die" and Bob Dylan's "Knockin' On Heaven's Door;" powerful renditions of The Who's "The Seeker" and Pink Floyd's "Another Brick In The Wall Pt. 2;" plus performances of Bumblefoot's "Objectify" featuring Guns N' Roses guitarist Ron "Bumblefoot" Thal on vocals and Tommy Stinson's "Motivation" with Stinson taking over the mic.