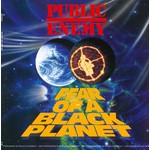 Fear Of A Black Planet is the third studio album by Public Enemy, originally released on March 20, 1990, by Def Jam Recordings. It was produced by the group's production team The Bomb Squad, who sought to expand on the dense, sample-layered sound of Public Enemy's previous album, It Takes a Nation of Millions to Hold Us Back (1988). Their songwriting was partly inspired by the controversy with member Professor Griff and his dismissal from the group in 1989.

This deluxe edition is part of a yearlong, ongoing celebration marking the 30th anniversary of the iconic Def Jam record label founded in 1984 by Rick Rubin & Russell Simmons.

Deluxe editions includes the original album on disc one and the second disc consists of commercially released 12", CD singles & remixes.