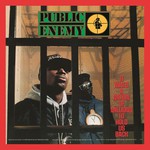 When Public Enemy's second album, It Takes a Nation of Millions to Hold Us Back, was released in 1988, "it completely upended the way records are made. It challenged the concept of reinvention in recorded music," writes The Roots' Amir "Questove" Thompson in the booklet that is included in this deluxe two-CD/DVD reissue of the album. Wax Poetics magazine editor-in-chief Andre Torres calls it, simply, "a magnum opus… the greatest hip-hop album ever made, and one of the most important recordings of the twentieth century… It changed the course of not only hip-hop, but much of popular music thereafter."

This Deluxe Edition of It Takes a Nation of Millions to Hold Us Back includes the original album, executive produced by Rick Rubin and Bill Stephney, and produced by Hank Shocklee, Keith Shocklee, Eric "Vietnam" Sadler and Carl Ryder (aka Chuck D), better known as the Bomb Squad. It features the classic tracks, "Bring the Noise," "Don't Believe the Hype," "Louder Than a Bomb" and "Rebel Without a Pause." The second disc includes 13 rare bonus mixes, among them the original "No Noise" version of "Bring the Noise," instrumental versions of "Rebel Without a Pause," "Night of the Living Baseheads" and "Black Steel in the Hour of Chaos," as well as the soundtrack version of "Fight the Power" from Spike Lee's groundbreaking Do the Right Thing movie. The third disc is a DVD of the 1989 VHS release Fight the Power… Live, directed by Hart Perry and long unavailable for sale. It includes the original videos for "Fight the Power," "Black Steel in the Hour of Chaos" and "Night of the Living Baseheads" along with several live performances.

It Takes a Nation of Millions to Hold Us Back was named one of the 100 greatest albums of all time by Time magazine, "the greatest rap album of all time, a landmark and a classic" by Q, and "the greatest hip-hop album ever" by New Musical Express. Rolling Stone ranked the album #48 on its list of the "500 Greatest Albums of All Time," the highest-ranked of the 27 hip-hop albums on the list. Music from the album has been sampled, covered and interpolated by numerous artists in all genres including the likes of the Beastie Boys, Benny Benassi, Fat Joe, Game, Jay Z, Jurassic 5, Ludacris, Madonna, My Bloody Valentine, The Roots, Tiga and Tricky.

This Deluxe Edition is part of a yearlong, ongoing celebration marking the 30th Anniversary of the iconic record label founded in 1984 by Rick Rubin and Russell Simmons. Its influence and impact on modern music, culture, and lifestyle is unparalleled.