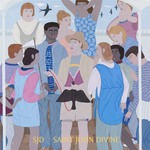 In typically untypical form Saint John Divine is almost the polar opposite of Elastic Wasteland, the entirely self-recorded and self-played album that was awarded the prestigious 2013 Taite Prize. This time Sean Donnelly has gathered a group of outrageously talented like minds at Roundhead Studios, to record 11 songs that distill the very essence of SJD, in what could be called his most direct and compelling manoeuvre yet. Joining Sean are a core group made up of long time guitar spar James Duncan, percussive prodigy Chris O'Connor, the honey tonsilled Sandy Mill, vibrant veterans Victoria Kelly and Mike Hall, and new addition Neil Finn adding keyboards and cooing bvs. Sitting right up there with previous triumphs including 3, Lost Soul Music, Southern Lights, Songs From A Dictaphone and Dayglo Spectres this album aims straight into the heart of song craft with without forsaking any of the playful experimentation and adventurousness that typify Sean's music.

Saint John Divine is the beginning of a trilogy of albums, that will further cement Sean Donnelly's place as one of the most original, innovative and intelligent songwriters and musicians to be found just about anywhere

Girls In Peacetime Want To Dance

Shadows In The Night