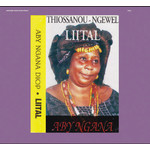 Aby Ngana Diop was the most famous taasukat in Dakar, Senegal in the 1980s and 1990s. Taasu is a Wolof-language poetic style, usually performed by women griots over frenetic drum patterns, with an aggressive verbal flow thought to presage rap. Her only album Liital was groundbreaking in the history of Senegalese music because it was the first commercial recording to feature a traditional female taasukat performing to the modern accompaniment of mbalax, Senegal's quintessential pop genre.

After a few years of searching for Ms. Diop's family members-she passed away from a heartattack in 1997-it took another year to get the release sorted it out but I'm happy to report this is all square with her family in Dakar (thanks to the help of a friendly professor from Boston who also contributed excellent liner notes).