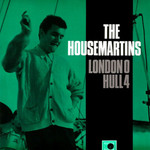 "Though dismissed by naysayers as a poor man's version of the Smiths, the Housemartins - along with the Style Council, Billy Bragg and the Redskins among others - were at the forefront of 80s agitpop. Blending socialist politics and Christianity with a dose of soul and gospel (the inner sleeve of the album exhorted fans to "Take Jesus - Take Marx - Take Hope"), the "fourth best band in Hull" wrapped barbed and frequently hard-hitting lyrics in insanely catchy melodies.

The 23 years since its original release have been surprisingly kind to the Housemartins. Whereas as many of their contemporaries have dated thanks to the production values of the day, their sound - with the caveat of a few bass solos replacing the then verboten guitar work outs - remains as fresh as it did in 1986 and it's almost depressing that their lyrics are as pertinent today as they were then.

The attack on political apathy in Sheep still seethes with a righteous anger as elsewhere, Sitting On A Fence is a well-aimed swipe at the values that "…see both sides of both sides". It's still a thing of wonder that something as caustic as Happy Hour - an assault on corporate work culture and casual sexism - reached the UK Top 3.

Backed by soaring harmonies from bassist Norman Cook (then yet to become Fatboy Slim), guitarist Stan Cullimore and drummer Hugh Whitaker, the band's secret weapon was Paul Heaton's angelic voice. Bright and clear, his delivery ensured that the Housemartins never once fell into empty hectoring or radical postures while revealing a white soul voice to seriously rival Mick Hucknall's....

Passionate, committed and uncompromising, London 0 Hull 4 maintains its unswerving capacity to entertain while still asking 'which side are you on?" - Julian Marszalek 2009 BBC Review