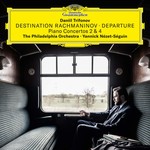 Recorded with Yannick Nézet-Séguin and the Philadelphia Orchestra, the orchestra most closely associated with the composer with which Rachmaninov himself famously recorded the set of concerti over 80 years ago.

The two-part "Journey with Rachmaninov" begins with DESTINATION RACHMANINOV - DEPARTURE, including the great Piano Concerto No. 2, probably Rachmaninov's best-loved work, paired with the equally beautiful and rarely performed 4th Concerto. These voluminous works are contrasted with a taste of Rachmaninov the master miniaturist, with solo piano transcriptions of Bach's Partita in E Major.

"From the huge sonority of the C minor concerto's opening chords, the pianist shows that he means business, but it is the astounding delicacy of his virtuosity in the piu vivo section - recalling Horowitz - that marks him out as a soloist of the first rank in this work. He is no less commanding in the more "jazzy, mechanical" (Trifonov's words) G minor concerto" The Sunday Times

"Trifonov is a gifted pianist, the Philadelphians have the music in their blood and Nézet-Séguin has an eye for detail and careful phrasing…Overall, this is another fine, well-recorded addition to the lengthy discography but one which neither astonished nor moved me." Gramophone

"These are performances of such musical awareness, tonal variety and dazzling virtuosity that even the Second, one of the most popular of all piano concertos, has every trace of routine and over-familiarity stripped away. Trifonov has the gift of making something compelling out of the least attention-seeking piano lines...the woodwind playing is superb, but it's the simple eloquence of Trifonov's playing that constantly draws the ear." The Guardian