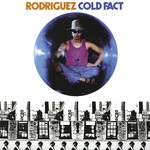 'Cold Fact' is a wonderful example of folk-rock at it's very best and is cleverly intertwined with social commentary. Rodriguez released Cold Fact in 1970 amidst the social, political and cultural upheaval that the USA was experiencing both within it's borders and as a result of the various wars it was involved in, most notably Vietnam. Where Bob Dylan had come through the educated middle-class folk sect of Greenwich Village, Rodriguez represented a voice more from the street than any university campus, which may go some way toward explaining his apparent musical demise. On the contrary, Rodriguez released a second album and continued to perform for audiences around his home town of Detroit, but never gained mainstream recognition until the release of the documentary 'Searching For Sugar Man' in 2012. Since then there has been a resurgent interest in Rodriguez and his form of psychedelic-folk music best realised on 'Cold Fact'. With songs like 'Sugar Man' and 'I wonder' Rodriguez is now firmly ensconced in America's post-sixties musical lexicon.