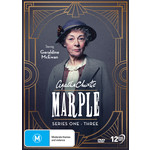 Series 1: The Body In The Library, Murder At The Vicarage, 4.50 From Paddington,
A Murder Is Announced
Series 2: Sleeping Murder, The Moving Finger, By The Pricking Of My Thumbs, The Sittaford Mystery
Series 3: Towards Zero, Ordeal By Innocence, Nemesis, At Bertram's Hotel