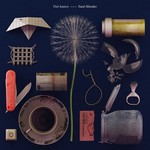 Throughout their first chapter, Del Amitri mastered the art of timeless, melodically focused pop-rock. Their hits - including 'Nothing Ever Happens', 'Always The Last To Know' and 'Roll To Me' - became international radio staples, propelling a career that accomplished five UK Top 10 albums and 6 million sales.

Now Del Amitri are set to return with the release of their seventh studio album, 'Fatal Mistakes', on May 28th via Cooking Vinyl.
Del Amitri's naturalistic approach to this album involved plugging in amps rather than booting up laptops, primarily playing to their strengths by recording live as a five-piece band. The result is the brilliant sound of a 35-years-young band doing what they do best: melodic rock songs with lyrical bite, soulful comfort and heart-swelling uplift.