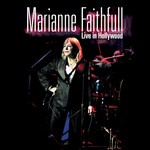 Marianne Faithfull is truly one of the iconic figures that emerged from the British music scene in the Sixties. "Live In Hollywood" was recorded in Spring 2005 and features songs from her then-current album "Before The Poison" as well as celebrated classics such as the aforementioned "Sister Morphine", "Ballad Of Lucy Jordan", "Broken English" or "As Tears Go By".