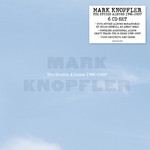 To celebrate 25 years since Mark Knopfler's first solo release, outside of his soundtrack recordings, Mercury Records have remastered each of his studio albums released between 1996 and 2007 and packaged them together in a package that includes Golden Heart, Sailing To Philadelphia, The Ragpicker's Dream, Shangri-la and Kill To Get Crimson. As well as those outstanding releases there is a CD of B-Sides covering the aforementioned period as well as some art cards exclusive to this set.

Golden Heart:
Darling Pretty
Imelda
Golden Heart
No Can Do
Vic And Ray
Don't You Get It
A Night In Summer Long Ago
Cannibals
I'm The Fool
Je Suis Désolé
Rüdiger
Nobody's Got The Gun
Done With Bonaparte
Are We In Trouble Now

Shangri-la:
5:15 AM
Boom, Like That
Sucker Row
The Trawlerman's Song
Back To Tupelo
Our Shangri-La
Everybody Pays
Song For Sonny Liston
Whoop De Doo
Postcards From Paraguay
All That Matters
Stand Up Guy
Donegan's Gone
Don't Crash The Ambulance

Gravy Train: The B-Sides 1996-2007:
Small Potatoes
What Have I Got To Do
Gravy Train
My Claim To Fame
Summer Of Love
Camerado
Tall Order Baby
Let's See You
The Long Highway