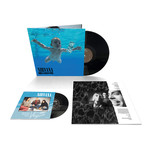 'Nevermind' was the massive sophomore album from the Seattle trio, Nirvana - featuring "Smells Like Teen Spirit", as well as "Lithium", "In Bloom" and "Come as You Are".

"There really isn't another album in history that is as genre defining as Nirvana's 'Nevermind'. Released in 1991, it was almost single-handedly responsible for the birth of what became known as the "grunge" movement, and has gone on to sell millions of copies worldwide.

This sophomore recording from the Seattle based trio was the very first release on the then new DGC label - it's predecessor, the group's raw-edged debut 'Bleach' was released through indie specialists, Sub Pop. 'Nevermind' was produced and mixed respectively by the amazing team of Butch Vig (who would also go on to form Garbage) and Andy Wallace.

With its grinding guitars, pounding drums, and Kurt Cobain's distinctive voice, 'Nevermind' effectively fused the aggressiveness of alternative punk with melodic '70s rock. It features THE anthem of the early '90s in "Smells Like Teen Spirit", as well as such memorable songs as "Lithium", "In Bloom" and "Come as You Are".

'Nevermind' was Nirvana's steppingstone into the media spotlight of nearly every nation on the planet, which led to the band, and in particular front man Kurt, becoming a natural icon of the stoner / slacker generation. In light of the album's huge success the group undertook a massive touring schedule. They also found time to create a third and final studio album in the form of their excellent 'In Utero', which in itself is a "must hear".

However, the constant attention from the paparazzi eventually ended up turning Kurt's fragile psyche upside down and inside out… Drug addiction and said media induced alienation helped lead to his eventual suicide in early 1994. Although this was a very sad thing to have happened, it is at least comforting to know that his contributions to modern music will never be forgotten - 'Nevermind' plus the rest of his legacy of work will live on in the hearts of his many loyal fans.

In the wake of Kurt's passing, the other two members of Nirvana have both continued on with their own careers, but with quite differing degrees of success. Bassist Krist Novoselic formed a number of interesting yet ultimately unsuccessful bands throughout the rest of the '90s and the early millennium, before choosing to concentrate most of his attentions on politics. Meanwhile, Dave Grohl took to fronting his own band, The Foo Fighters, who have gone from strength to strength and are easily one of the greatest rock bands around today. Being an incredibly talented singer / songwriter, guitarist & of course drummer has also been instrumental in allowing Dave the opportunity to perform with a number of other fine musicians & projects including: Queens of the Stone Age, Probot, and Tenacious D."
-GEOFF / MARTY (20/11/2005)

Side One:
Smells Like Teen Spirit
In Bloom
Come As You Are
Breed
Lithium
Polly

Side Two:
Territorial Pissings
Drain You
Lounge Act
Stay Away
On A Plain
Something In The Way

7"
Side One:
Endless, Nameless

Side Two:
Even In His Youth
Aneurysm