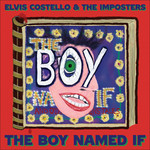 Elvis Costello and The Imposters release, 'The Boy Named If,' is a new album of urgent, immediate songs with bright melodies, guitar solos that sting and a quick step to the rhythm. Costello says, "The full title of this record is 'The Boy Named If (And Other Children's Stories).' 'IF,' is a nickname for your imaginary friend; your secret self, the one who knows everything you deny, the one you blame for the shattered crockery and the hearts you break, even your own. You can hear more about this 'Boy' in a song of the same name,"

'The Boy Named If,' - Produced by Sebastian Krys & Elvis Costello - is a collection of thirteen snapshots, "That take us from the last days of a bewildered boyhood to that mortifying moment when you are told to stop acting like a child - which for most men (and perhaps a few gals too) can be any time in the next fifty years," as Costello put it.

Speaking of recording sessions, Costello said, "The initial rhythm section for this record was my guitar and Pete Thomas' Gretsch drums, recorded down in Bonaparte Rooms West. Our Imposter pal of 20 years standing, Davey Faragher soon dialed in his Fender bass and vocals while we awaited dispatches from France." "If the record sounded swell as a trio, Steve Nieve's organ was the icing on the cake, the cherry and the little silver balls," Elvis added.

1. Farewell, OK
2. The Boy Named If
3. Penelope Halfpenny
4. The Difference
5. What If I Can't Give You Anything But Love?
6. Paint The Red Rose Blue
7. Mistook Me For A Friend
8. My Most Beautiful Mistake (guest vocal by Nicole Atkins)
9. Magnificent Hurt
10. The Man You Love To Hate
11. The Death Of Magic Thinking
12. Trick Out The Truth
13. Mr. Crescent