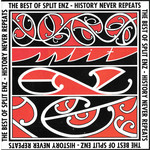 Australian issue of the Split Enz compilation History Never Repeats. Becoming one of Aotearoa New Zealand's most successful music exports, highlighting the songwriting prowess of Tim Finn and younger brother Neil, Split Enz managed something very few have done; have Australia claim them as one of their own.

Featuring all of their greatest hits including "History Never Repeats", "I See Red", "I Got You" and "Six Months In A Leaky Boat", which was initially banned by the BBC due to it being released during the Falklands War conflict, this collection shows just how powerful the band's pop chops were.