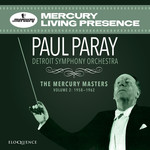 Under the leadership of Paul Paray, the Detroit Symphony Orchestra quickly cultivated a brilliance of attack, precision of ensemble and moulded sonority. Their signature sound was ideally suited to the dynamic profile of Mercury Living Presence recordings, especially in stereo. This edition of their recordings, remastered from the original sources by Thomas Fine and Wilma Cozart Fine, chronicles the last five years of this partnership (1958-62). This original jackets collection is presented chronologically as when first issued.

LIMITED EDITION - ONE PRESSING ONLY

For a decade in the 50s and early 60s, the Detroit Symphony Orchestra won acclaim as one of the great orchestras of the world under its music director Paul Paray. Rebuilding the orchestra almost from scratch with the help of Toscanini's former concertmaster Mischa Mischakoff, Paray quickly cultivated a brilliance of attack, a precision of ensemble and moulded sonority in the image of the French orchestras he had led before the Second World War, now boosted by a level of technical finesse which was rivalled only by George Szell in Cleveland and Fritz Reiner in Pittsburgh and Chicago.

The DSO/Paray sound was ideally suited to the dynamic profile of Mercury Living Presence recordings, especially in stereo, and the label captured them in repertoire which initially focused on Paray's strengths in French and German music, with albums of Beethoven, Mendelssohn, Chausson and Ravel which stand the test of time. However, Paray was known as a universalist, at home in any repertoire except modernism. The stereo recordings in this set, made between 1958 and his final season as music director ending in 1962, including thrilling accounts of Dvorak's 'New World' and Sibelius's Second symphonies, as well as an explosive album of Suppé overtures.

Paray had been friends and colleagues with several of the French composers featured here such as Ravel, Florent Schmitt and Jacques Ibert. Their music naturally responds to the lightness of touch, subtly restrained rubato and unsentimental phrasing which Paray brought to everything he conducted. The substantial bonus is a first-ever CD release for 'The Naked Carmen', a rock opera devised and arranged by John Corigliano and David Hess from Bizet's score, as played by the Detroit musicians and Paray with the addition of modern elements such as guitars and a rhythm section. The set concludes with Paray's sole recording for Deutsche Grammophon, a coupling of the Ravel piano concertos made in Paris with Monique Haas.
Recordings in this new set have been remastered from the original sources by Thomas Fine, son of the Mercury producer Wilma Cozart Fine and the label's chief engineer Robert Fine. They are presented in this original jacket collection as they were first issued, and accompanied by a richly illustrated booklet which contains essays on the sessions by Thomas Fine and on the DSO/Paray partnership by Peter Quantrill.

"Brilliantly and opulently set forth by Paray [La tragédie de Salome] … With his affinity for French music of all periods, Paray enhances the Suite No. 1 with an exhilarating reading." High Fidelity, April 1959 (Schmitt/Lalo)

"[Between Paray and Szell] it's a contest of perfection between two great conductors and orchestras, and technically it ends in a draw. But interpretatively, Paray wins hands down … Where Paray really glows is in the Reformation Symphony, of which he gives an unhurried and noble account." High Fidelity, August 1959 (Mendelssohn)

"Paray gives a sensible, fairly straightforward reading, yet one that has plenty of Schumannesque glow." High Fidelity, October 1959 (Schumann, Symphony No 1)

"The performance which gave me outstanding pleasure was that of the Siegfried Idyll, because it is kept moving and never sentimentalised." Gramophone, October 1959 (Wagner)

"Paray's readings are full of strength and dramatic intensity, yet every note is clear, crisp, and correct … This should be a whopper in stereo." High Fidelity, March 1960 ("Bouquet de Paray")

"Paray surely doesn't disappoint us here … The Detroit orchestra proves once again that it ranks among the best. Its playing is expert in every department, and every section is revealed in lifelike fashion by Mercury's engineers." High Fidelity, May 1960 (Sibelius)

"Paray gets playing of great style and virtuosity; and, the most essential thing in a performance of light music, his players sound as if they are really enjoying a session away from sterner things." Gramophone, October 1960 (Lalo)

[Valses nobles et sentimentales is] a performance chock full of style and utterly convincing … L'Après-midi is almost as good in its very different way… there is so much to delight on this record." Gramophone, November 1960 (Debussy/Ravel)

"Paray has always been a romantic at heart, and he plays this music with affection but without exaggeration." Gramophone, October 1961 (Wagner)

"Each work included is represented by its finest recorded performance to date. Paray obviously is engaged here in a labour of love rather than duty … the exuberant dances from Le roi malgré lui never sounded more proudly high-stepping and glittering." High Fidelity, January 1962 (Chabrier)

"Paray's stronger treatment tends to clear away the cobwebs and reveal the music in a fresher, brighter light … the stereo version, vibrant and realistic in its expansiveness and separation, goes to the very top of my list." High Fidelity, February 1962 (Franck)

"An excellent version … The virtuosity of this ensemble is rightly renowned throughout the world, as well as the spirit and the homogeneity that the great French conductor instilled in them. We will find here his eminent qualities in the service of a wise conception of the obsessions of Berlioz." Revue des deux mondes, June 1963 (Symphonie fantastique)

"In his reading [of La valse] every passage, every voice is crystal-clear; at the same time the bigger climaxes come with crashing effect. It all adds up to one of the most lucid and most exciting performances of this work I have ever heard." High Fidelity, July 1963 (Ravel/Ibert)

"Done with Paray's characteristic verve and precision, enhanced throughout by superb recording and warm acoustical ambiences. The dynamic and frequency ranges are quite extraordinary." High Fidelity, September 1963 ("Ballet Highlights")

"Paray and the DSO are at their vital best here, and the blazing recordings of their taut, rousing performances sound just as impressive today as when they first appeared." High Fidelity, March 1964 ("Heroic Overtures")