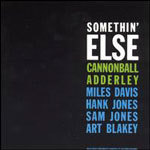 ALLMUSIC :-
It isn't too difficult to understand why MFSL considered this album to be a worthy candidate for an Ultradisc reissue -- aside from Adderley, you have a lineup that includes Miles Davis, Hank Jones, Sam Jones, and Art Blakey. This is a group that could take on a Barry Manilow number and turn it into a jazz masterpiece. MFSL have done the purchaser a favor, too, by including an additional track that was left off the original album. This sixth track, "Alison's Uncle," closes out the album on a high note, changing the flow of energy in an interesting way (purists can still finish up on a quieter note, as with the original, by programming "Dancing in the Dark" as the final track). In many ways it's a surprise that this track was left off originally -- it's an excellent piece, with Adderley and Davis trading licks and solos while Jones and Blakey keep pace. Blakey also takes some terrific solos. The remastering job is the usual superb MFSL effort, producing clear sound with almost no background noise. Due to the original recording (made in 1958), Davis' trumpet sometimes seems a little shrill and metallic, but it's not an overwhelming problem -- certainly not when you consider Davis' style. Altogether, an excellent addition to any jazz collection.

BLUENOTE :-
One of the best known record dates in the history of modern jazz, the chemistry among Adderley, Miles Davis, Hank Jones, Sam Jones and Art Blakey is amazing. Their radical reworkings of "Autumn Leaves" and "Love For Sale" are masterpieces. Miles' title tune and Nat Adderley's "One For Daddy-O" are classics.