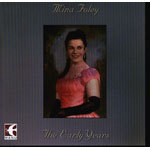 These archival Mina Foley tracks were recorded in New Zealand, between 1949 and 1953.

Mina Foley (9 March 1930 - 21 January 2007) was a New Zealand coloratura soprano, who rose to prominence in the 1950s. She was the first of many to study under the acclaimed singing teacher Dame Sister Mary Leo. Foley's voice was dubbed "The voice of the century" by some.

On her 1955 New Zealand tour every concert was sold out. She studied abroad, and performed in Ireland, Italy, England, USA and Australia, returning to New Zealand in 1960. Foley had a severe mental breakdown in 1961, forcing her retirement after only one year performing in New Zealand. She spent the next 16 years in Oakley Psychiatric Hospital. In 1978 she staged a return concert. However, her return to singing was short-lived, and ill-health continued to plague her until her death in 2007.