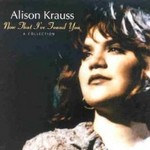 Alison Krauss
Now That I've Found You - A Collection

Alison's 1995 release, 'Now That I've Found You', showcases her ability to shine in a variety of settings, revitalising traditional styles of country music including bluegrass.

Since her Rounder debut in 1987, Alison Krauss has been praised by critics and country music fans alike. Revitalising traditional styles of country music including bluegrass, the singer and fiddler is the focus of much public attention. Her unique, yet firmly-rooted approach to country music has won her several Grammys.

Her 1995 release, 'Now That I've Found You', showcases her ability to shine in a variety of settings. The title track and "Broadway" find Krauss in a more pop country environment; however even her pop music is uniquein its smart harmonic structure, and her ability to avoid pat or stock poetic devices. On "Tonight I'll Be Lonely Too",Krauss and Union Station (her almost constant musical companions) switch to a decidedly bluegrass feel, and on "When God Dips His Pen of Love In My Heart", she plunges into a Southern gospel style with help from the Cox Family. Alison Krauss has the remarkable ability to make these diverse musical directions seem logical and congruent.