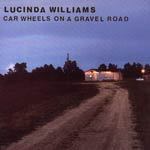 The classic, beautifully captivating fifth album from the woman who is widely considered to be one of the best singer / songwriters working today.

"Car Wheels on a Gravel Road" is the classic, beautifully captivating fifth album from the woman who is widely considered to be one of the best singer / songwriters working today.

It was six years in the making, but when released in 1998, it proved to be very appealing to a wide audience. The runaway success of 'Car Wheels on a Gravel Road' led to Lucinda's second Grammy, gold certification, being placed on the top of countless critic's Top Ten lists, and masses added to her ever-growing legion of fans. Since that release, Lucinda has been called one of the top 100 women in rock by VH1 and named as the most influential female singer of the 1990s, among many other accolades.

Lucinda Williams writes the songs of experience - her voice can capture joy and misery with the same intensity, reflecting her own lifetime. Born in Lake Charles, Louisiana to renowned poet Miller Williams and a talented pianist mother, Lucinda had a ferocious love for music and words at an early age. Her childhood travels took her from Fayetteville, Arkansas to Santiago, Chile and everywhere in between. Her itinerant nature can be found in her music, as well, since she draws from a diverse array of artists who influenced her.

"I loved Loretta Lynn and Hank Williams, but also Bob Dylan and the Doors and Jimi Hendrix," she says. "I don't see anything wrong with loving all kinds of music."

The history of Lucinda's career is fast becoming the stuff of music legend, but a brief primer is in order: after two early albums, 'Rambling on My Mind' (1979) and 'Happy Woman Blues' (1980), Lucinda's self titled release from Rough Trade is considered her breakthrough. 'Lucinda Williams' (1988) included some of her best-known classics, including "Passionate Kisses," which won her a songwriting Grammy in 1994. 'Sweet Old World' was released in 1992 to continued applause and six years later came 'Car Wheels on a Gravel Road', widely considered as one of the most influential records of the last half-century and hailed as "the Blonde on Blonde of the 1990s" by legendary producer Joe Boyd.

Her trademark voice is in top form here - eclectic as Lucinda herself, her singing can capture everything from stark betrayal to unadulterated joy. Therein lies the secret to Lucinda's genius - she writes and sings about real life: the pain, pleasure, and everything in between.

Lucinda Williams is a champion of non-conformity. Branding her own distinct style of folk, country, rock and blues in the '70s and '80s, she has certainly achieved staying power.

There Will be a Light
more suggestions…