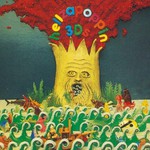 Released in 1992, this album opens with the classic guitar riff of 'Outer Space' and finishes with the achingly beautiful 'Jewel'. In between, throw in the likes of 'Hellzapoppin' and 'Sunken Head' and you have the 3D's at their explosive best.

"The winners of the noisy-but-perfect pop song award goes easily to the 3Ds, whom none can emulate."

During the first half of the '90s with their own special twisted driving guitar pop.