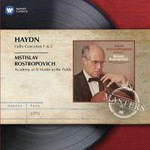 "A quite extraordinary achievement. Marvellously expressive cello playing. The orchestra gives splendid support and the sound is warm and ingratiating"
(Gramophone)

Mstislav Rostropovich passed away on Friday April 27th 2007 aged 80. Rostropovich was one of the truly charismatic artists of our age.

The two Haydn Cello Concertos have a strange history: one was discovered only as recently as 1963 and the other was long thought to be by another composer. They are both now acknowledged as genuine Haydn: the first dating from around 1765 and the second from 1783.

They are beguiling works, and Rostropovich in this famous recording made at Abbey Road Studios in 1975 with the cellist himself also directing the Academy of St. Martin in the Fields, presents them as the classic Haydn works we now know them to be.

"A quite extraordinary achievement. Marvellously expressive cello playing. The orchestra gives splendid support and the sound is warm and ingratiating"
(Gramophone)

Review on this series by one of our customers:
"Just a little feedback on this outstandingly superior set of reissues. Of all the recent remastered performances coming out, this set is easilly the best. There is a very definite improvement in detail, dynamics and openess. But the most notable improvement is in sound stage presentation where there is very good transparency of sound. This is especially good with the EMI GR's. The others, Decca Legends and Philips 50 seem to achieve good transparency but at the expense of depth (there is a more shallow soundstage front to back image). I have been able to compare a couple of them with older ADD reissues and also the original vinyl records. The best of the series are the Rachmaninov symphony 2, the Mahler # 2 and especially the Mahler # 5 you just sent me.....awesome performance and recording. I presume the Abbey Rd engineers are using 24 bit, 96K technology like the other companies. If only we could "playback" with this technology. Maybe we will one day. Anyway Guys, just pass this on to your classical people so they get some feedback. I will be geting some more of these GR's in due course." Regards, Graeme York

All 100 great performances in the new Great Recordings series have enjoyed the application of ART - an acronym for Abbey Road Technology - and means that they have all been remastered at the music world's most famous studio, a subtle modification that enhances each and every one with a stronger sense of presence and realism to bring out the best sound quality.

"EMI's Great Recordings of the Century is exactly what it says: these classic interpretations warrant a place in everybody's collection."
The Times (October 1998)