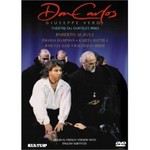 "Mattila gives the most masterly performance as the Queen...Alagna is in superb voice too, firm and heroic" Penguin Guide

"If you have the right eqipment, the far superior sound of this DVD beats the video version of this strong, convincing production."
Gramophone April 2001

"The score is tautly and warmly presented, as on cd, by Antonio Pappano and the principals are as fine a team as have ever been assembled for this opera on disc...Mattila gives the most masterly performance as the Queen...Alagna is in superb voice too, firm and heroic" Penguin Guide

Well this is pretty heavy going stuff indeed, and pretty much the sort of stuff that separates the opera lover from the non-opera lover. I guess I must fall into the latter category as I really did find this heavy going, far more so than any other opera DVD that I have reviewed. This is in fact the full five Act original version of the opera sung in the original French. At just on three and a half hours long, it really is the sort of thing that anyone but true opera lovers would need to spread over a couple of nights of viewing: I know, for I needed to spread the review over three nights.
Recorded live in March 1996, it is perhaps interesting to note that the self same recording I believe is released on CD by EMI. Now that makes for an interesting point of reference about the actual quality of the performance. Pulling out my trusty copy of The Penguin Guide To Compact Discs, sure enough therein the performance is detailed. According to that revered guide, the performance is the clear first choice on CD for those requiring the original French version, and the second choice overall of any version. They basically go on to say how good the performance is, how marvellous the cast is and make a rather interesting comment about the recorded sound, which will bear enunciating in the audio transfer section of this review. So according to that guide, we are basically looking at a very good performance of this opera.

And what exactly is the opera about? Well, take what appear to be your basic opera ingredients of love, jealousy, duplicity, retribution, intrigue, murder and mayhem, mix them all together and you have pretty much the basic story here. Elizabeth de Valois (Karita Mattila), daughter of Henri II, the King of France, is betrothed to Don Carlos (Roberto Alagna), the Infante of Spain as part of the peace deal set out in the Treaty of Cateau-Cambresis. When she accidentally meets her betrothed in the forest of Fontainebleau, she is overjoyed and is madly in love. However, plans change and shortly thereafter Elisabeth finds out that she may be marrying a Spaniard but it will not be Don Carlos, but his recently widowed father Philippe II (Jose Van Dam). She is not overjoyed by this news, but stoically understands the politics involved and agrees to marry the old bastard (well, he was old and anyone who supported and encouraged the Spanish Inquisition is a bastard in my book) on the pleadings of the people. Don Carlos is devastated by the news and seeks refuge in a monastery.

His friend and confidant Rodrigue (Thomas Hampson), Maquis of Posa, visits to urge Don Carlos to take up the cause of the people of Flanders who are being subjugated by the brutal regime of Philippe II. He also encourages him to come clean on his feelings for the Queen, once his betrothed and now his mother. Rodrigue agrees to act as a go-between and arranges for Don Carlos to meet the Queen in seclusion at the monastery, where he begs the queen to get the King to allow him to go to Flanders to escape the torture of being in Spain and near her. After Don Carlos goes, Philippe turns up and wants to know why his Queen is alone, summarily sacks her lady-in-waiting and encourages a discourse with Rodrigue from which the latter emerges as the King's closest confidant - with a mission to find out the bond between Queen and son that the King suspects is more than mere friendship. You can probably guess where the remaining two acts head?

By no means the most original story ever told, but then again given the setting in Europe in the 1500s that is hardly surprising. After all, history books are full of the sordid details of the goings on of European royalty. To be honest, the material really does not sustain the whole three and a half hours of this five act epic and a judicious pruning to the four act version would be very nice indeed. There is certainly no real complaint with the cast here, and they do a pretty sterling job. But then again, the cast does include some of the very best around at the moment. Roberto Alagna seems to be the flavour of the past five years or so and it is difficult to ignore his name appearing on what seems to just about every major opera to be issued on CD in that time! To be fair he is not a bad singer at all, but then again his competition at the moment is hardly the greatest. Karita Mattila has made a serious name for herself over the same sort of period through this very role and she is the highlight here as far as I am concerned. Jose Van Dam has perhaps not received the highest accolades over his career but he certainly is a very steady performer as is Thomas Hampson and they both relish the cast to work with here.
Ian Morris

The Art of the Prima Donna