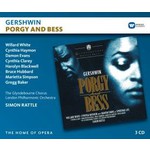 "A performance that entranced audiences at Glyndebourne and which crosses over to CD virtually intact, revealing what a great dramatic world Gershwin conjured up."
(Gramophone)

"One of the most important opera recordings of recent years" was Opera magazine's verdict on this Porgy and Bess, which immortalised Glyndebourne Festival Opera's first-ever production of Gershwin's masterpiece. "Simon Rattle treats Porgy as one of the great opera scores of the 20th century … the entire performance bristles with a theatrical immediacy … The cast is a great one, led by Willard White, a dark-voiced, dignified, ultimately noble Porgy … and Cynthia Haymon's lustrous Bess ... This is a great souvenir of a great Glyndebourne event."