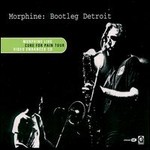 Cool live recording from 1994 including CD-ROM footage. Their swansong

Started as a "light-hearted experiment in darkness", and dubbed by PJ Harvey as "the sexiest band around", Morphine went on to sell over 2 million copies of their 3 albums worldwide!

'Bootleg Detroit' is a live recording from 1994. It was mixed by Mark Sandman and handed to Ryko to be released just before his sudden death of a heart attack in July 1999. The CD contains CD-ROM footage of 2 songs live at the Montreux Jazz Festival, complete with Sandman and his trademark 2-string guitar. This album represents Morphine as they would have liked to be remembered - "raw & rough around the edges".