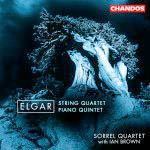 'This is exciting playing of the highest order, always touchingly involved, and above all, deeply committed. I thoroughly recommend the disc'.
- Elgar Society Journal

'…the new disc is the one to have, a fine promise for more discs from an outstanding group.'
- Gramophone Magazine (July 2001)

'…the revelatory release is a strong contender for my next Want List, and I commend it to anyone with a taste for Romantic chamber music slightly off the beaten track.'
- Fanfare

1997 marks the tenth anniversary of the Sorrel Quartet, which is universally recognized as one of Britain's finest ensembles. The Quartet performs at all the major British venues and festivals and broadcasts regularly for BBC Radio 3 and the World Service. Abroad they have toured Australia, Austria, Cyprus, France, Germany, Italy, Mauritius, The Seychelles, North and South America.

Composers such as Elena Firsova, Richard Orton, John Paynter and James Wishart have written quartets especially for the group. Other premiers have included works by Diana Burrell, Gerard McBurney and John Tavener.

The quartet has held residencies at the Universities of Liverpool and York and their international schedule also includes giving chamber music masterclasses.