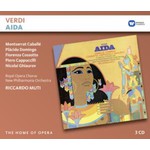 This Aida, as notable for its finesse as for its splendour, launched Riccardo Muti's recording career in 1974 and has set a formidable standard ever since. No composer is closer than Verdi to Muti's heart, and the conductor's passion and integrity inspire a cast led by five of the greatest Verdi singers of their time, all at the height of their powers.

'An outright winner. Muti is the undoubted hero, so compelling is his interpretation of the score, and there are no weaknesses in his cast, which features five of the biggest operatic 'names' of the day.' (Gramophone)

"Muti does have a fine ear for detail and the New Philharmonia responds sensitively with some playing that reveals much of the magical colouring of Verdi's orchestral writing. The cast is dream-worthy...In terms of the voices it's hard to imagine how things could have been better achieved." International Record Review, January 2011

"Montserrat Caballé's Ethiopian slave-girl is tender, subtle and often thrilling. By her side, her rival Fiorenza Cossotto's Egyptian princess Amneris is sinuous yet simultaneously sumptuous. Placido Domingo is in golden voice...and Piero Cappuccilli makes a stern and implacable Amonasro...Most recordings of this opera have a weakness here or there; this has none." BBC Music Magazine, February 2011 ****