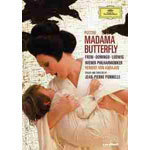 "Magical in its evocation of Puccini's most atmospheric score...Freni [is] as tenderly appealing to see as to hear...[Domingo sings] with similar fervour, responding to the inspired stage direction of Jean-Pierre Ponnelle to make this cad of a hero more complex than usual...The sound is full and atmospheric."
(Penguin Guide)

Puccini's tragedy of love betrayed by misunderstanding remains as haunting as ever. In Jean-Pierre Ponnelle's imaginative film, the great Italian soprano Mirella Freni is the innocent Japanese geisha, Cio-cio-san, while her thoughtless if well-meaning American lover is powerfully portrayed by Placido Domingo.