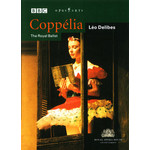 'Coppelia', a mechanical doll made by the toy-maker Dr. Coppelius, is so lifelike that some believe she is his daughter. The mistake leads to intrigue and jealousy in love.

"The story concerns the beautiful mechanical doll of toy-maker Dr. Coppelius, who is so realistic that the girls of the village plus one would-be Romeo believe her to be his real life daughter. This naturally leads to all sorts of misunderstandings, jealousy and finally hilarity. The village has a generic central European stylized appearance and the matching costumes of the villagers are colorful and attractive. The lead female dancer is Leanne Benjamin as Swanilda and Carlos Acosta is the handsome Romeo who arouses her jealousy by paying attention to Coppelia. Both seem excellent, though I'm the first to admit I'm not a ballet critic. Highest-quality image and resolution."
(Four Stars AudAud.com)